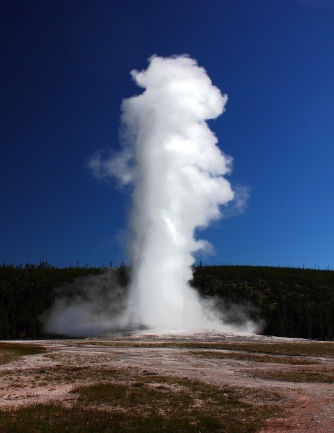 Old Faithful Geyser in Yellowstone National Park is so named because ever since people noticed how often it went off and started timing it between intervals, it erupted roughly at the same time. While that time period has changed slightly over the years because of underground vents flowing more or less, it has maintained approximately the same amount of time between intervals for several years at a time.

My husband and I have seen Old Faithful many times, usually with two to three thousand other people. One winter, however, we walked past it when no one was sitting there watching. One of those thoughts that your brain knows but your mind hasn’t yet realized hit me: Old Faithful erupts whether anyone watches it, all year round, winter or summer. It’s not a show where someone turns on a switch. Old Faithful simply erupts on its own and no one will stop it. Erupting is its nature.

I thought of Old Faithful the other day and it reminded me of God’s faithfulness throughout all time. God has always been faithful, no matter if people realize it; no matter if they are faithful to Him. When Jesus died on the cross for our sins and rose again, He brought us into a new relationship with God, for He became our heavenly Father and we became His sons and daughters. God has said He will never leave or forsake us. Faithfulness is your heavenly Father’s nature. Please let the continuity of Old Faithful remind you of God’s faithfulness to you and me!

Joshua 1:5 (NIV) [God said] “As I was with Moses, so I will be with you; I will never leave you nor forsake you.”
Matthew 28:18-20 Then Jesus came to them and said, “All authority in heaven and on earth has been given to me. 19 Therefore go and make disciples of all nations, baptizing them in the name of the Father and of the Son and of the Holy Spirit, 20 and teaching them to obey everything I have commanded you. And surely I am with you always, to the very end of the age.”

Five different times in the Bible people repeated what God had previously said to them. Even before He told Joshua in the above verse, in Deuteronomy 31:6 and 8 Moses tells Joshua and all the Israelites to be strong and courageous because God is going with them into the Promised Land and He will never leave them or forsake them. Hebrews 13:6 is probably the most well-known instance of this reminder: God has said, “Never will I leave you; never will I forsake you.”

My husband Alton took this picture because the computer ate mine.

Welcome to my updates from Africa! Please feel free to read, comment, question, share, let's encourage one another.

The Art of Blogging

If you think these letters of faith, hope and love are for you, they are. Get involved and find yourself at home here in our tribe.

Tracking events and trends in Israel, the U.S., Russia and throughout the Epicenter (the Middle East & North Africa)

Adventures in boatbuilding from a perpetual neophyte